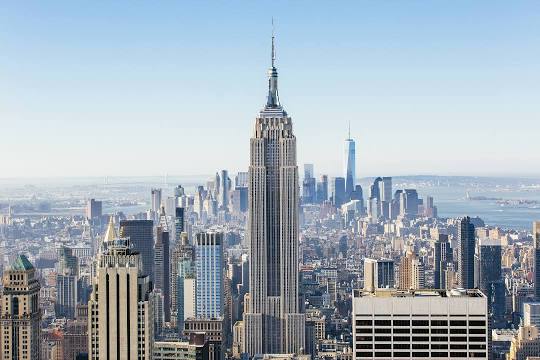 The Empire State Building is a 102-story Art Deco skyscraper in Midtown Manhattan in New York City, United States. It was designed by Shreve, Lamb & Harmon and built from 1930 to 1931.

Its name is derived from “Empire State”, the nickname of the state of New York. The building has a roof height of 1,250 feet and stands a total of 1,454 feet tall, including its antenna.

As of 2020, the building is the seventh-tallest building in New York City, the ninth-tallest completed skyscraper in the United States, the 49th-tallest in the world, and the sixth-tallest freestanding structure in the Americas.

The site of the Empire State Building, in Midtown South on the west side of Fifth Avenue between West 33rd and 34th Streets, was developed in 1893 as the Waldorf–Astoria Hotel. In 1929, Empire State Inc. acquired the site and devised plans for a skyscraper there. Wikipedia